skip to main | skip to sidebar

Goan Tofu Vegetables for recipe of the week. A good match would be a bowl of brown rice or chappathis.
Posted by Vidya at 7:35 PM No comments:

Don't you get scared reading the paragraph of ingredients on a frozen food package? I do. Most of the time there are unheard names on that list or terms that are ambiguous. So, we all go by FDA approved stamps. That's the confidence we have on the FDA.

One basic rule of thumb that I have learned is, if a package contains a list longer than 5, do not buy it. Corn syrup, high carbs,high sodium, and transfats are the basic no-nos. Next come the list of artificial ingredients, coloring and other chemical additives. Most of the time I've realized, the product goes back to the shelf although I feel guilty about the next person picking it up and feeding their family.

Why can't we just boycott these foods? Who will start?
Posted by Vidya at 2:53 PM No comments:

If you are looking for a zesty, tasty, spicy soup on a cold Saturday or Sunday, prepare this soup. It's better than a Mexican meal. For one, it's home made and, also extremely healthy. I have found saltless Tortilla are the best especially if you are watching your salt intake.
Posted by Vidya at 2:27 PM No comments:

The right amount of pesto in broiled, baked or roasted dishes generally add zest to the food. However, I don't believe adding pesto to dishes any which way would work at all. Some of the dishes I'd recommend adding pesto to are roasted potatoes, pizzas, pesto in oil as a dressing, and as a rub on toasted breads. Or,even in pastas. A touch in soups and vegetables give them just the right flavor.

The main ingredients for making a pesto are basil, pine-nuts, olive oil, garlic, Parmigiano-Reggiano cheese, salt and pepper. Blend them together and there you have your pesto. Keep garlic to a minimum to not make it overpowering.
Posted by Vidya at 2:02 PM No comments:

Several people swallow pills, meaning vitamin pills, regularly. The collection is usually a combination of A, B, C, D, E, plus calcium, B Complex, B12, you name it.

Haven't heard much about all vitamins, but vitamin E supposedly causes more harm than good. Other vitamins also fail in producing any benefits to our health.

Here's what I read about effect of vitamins in general. 'A January 2009 editorial in The Journal of the National Cancer Institute noted that most studies of vitamins had shown no cancer benefits, but some had shown unexpected harms. Two studies of beta carotene found higher lung cancer rates, and another study suggested a higher risk of precancerous polyps among users of folic acid compared with those in a placebo group.

In 2007, The Journal of the American Medical Association reviewed mortality rates in randomized trials of antioxidant supplements. In 47 trials involving 181,000 participants, the rate of dying was 5 percent higher among the antioxidant users. The main culprits were vitamin A, beta carotene and vitamin E; vitamin C and selenium seemed to have no meaningful effect.'
Posted by Vidya at 2:52 PM No comments:

Recipe of the week. Curry leaves chutney for nutrition and taste.
Posted by Vidya at 9:09 PM No comments: 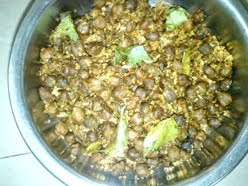 Another south indian Navrathri favorite usually made on the 8th day of the festival called Saraswathi Puja. This recipe is from Rhama, a classmate of mine in college.

Visit vidyaswamyskitchen.com for a variety of vegetarian recipes.
Posted by Vidya at 3:44 PM No comments:

Black-eyed Peas Sundal makes it to the top! 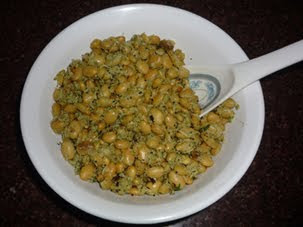 The criteria of course is the combination of appeal, taste and nutrition. The magic of black-eyed peas lies not only in its nutrients such as potassium, protein, carbs, iron, zinc and fiber, but also in its natural blood cholesterol lowering properties. Here's adding taste to nutrition and making consumption a pleasure.

Take a wok, add 1 Tbsp. olive or canola oil. Spurt 1 tsp mustard seeds after oil gets hot. Add the ground mixture and let it cook for about 6 mins. Add the cooked legume. Mix well on medium low heat for about 8 mins. Add salt to taste.

The photo and recipe are contributions from my friend Sudha from India. Another foodie who is as picky in taste as I am. Stay tuned for more authentic tastes from India.

Visit vidyaswamyskitchen.com for a variety of vegetarian recipes.
Posted by Vidya at 5:45 PM No comments:

Navrathri, the festival of Goddess Durga is celebrated and worshipped by Hindus for ten days and nine nights. In southern India, on each of the nine days a spicy preparation called Sundal is prepared and distributed to women and young girls along with a goodie bag of other gifts and treats.

Here is one typical preparation made with Chick peas.
Posted by Vidya at 4:38 PM No comments:

Vidya
Many would know me as that extremely picky, discriminating food critic. That is indeed true. During my travels abroad I often skip unpalatable meals and live on protein bars, fruits and nuts. In other words, I would much rather starve than gag and eat bad tasting food. Although on the one hand I could be called difficult when it comes to food, on the other I do truly know what tasty, healthy cooking is all about. If you are reading my blog, you probably are in some ways a 'foodie' as well. So, enjoy my blogs and comment as often as possible. Check out my Web site vidyaswamyskitchen.com. Test the recipe of the week and follow me on Twitter.